Author Chad Kister has been the victim of numerous terrorist attacks, by the coal industry and the corrupt police that they hire. He has filed three successful lawsuits against police agencies, including the Athens County Sheriff Department, the Athens City Police (in Ohio) and the Washington DC Metropolitan Police. The State of Ohio also charged Ohio Valley Coal Company Owner Robert Murray with assault.

Beginning September 5, 2010, Kister will begin posting the terrorist attacks, which often come daily, in the hopes that concerned citizens will investigate and lock up the terrorists, such as Tim Sheals.

I began a hostel in the upstairs apartment of my house (completely separate from my apartment)to offer housing in shared rooms for $10 a night as a non-profit to educate people about environmental issues, provide them a place to stay near public lands that need monitored and protected, and offer housing for low-income people: an incredible service to the impoverished Nelsonville-Buchtel community.

Tim Sheals emailed me, asking about staying in one of the rooms. I instructed that he could stay as a temporary patron until such time as he paid his security deposit and rent for the month. He came with an undisciplined husky, and turned out to be a major pest. His dog, Skyler, pushed his nose into hostel guests' food (and mine), and chased after community members.

Shortly after he moved some stuff in, I caught him going through my resource pile in the far back of my property, where he was not allowed. He stole some valuable construction materials.

On Thursday, September 2, 2010, Tim kicked down the door to my apartment, which was locked shut. He caused a massive amount of damage, that I witnessed. I called the Athens County Sheriff's office. While I was waiting for them to respond, I put in a screw to fix the lock that had been kicked out, for my protection. They were not clear if they would respond, and I had to keep the door between my upstairs apartment, where Terrorist Tim Sheals remained, and my apartment.

Two deputies and Lt. Rodney Smith came out to my house, and I showed them the damage. The door was badly damaged, as shown in the photo below. But Rodney Smith, who must be corrupt, said it was not damaged. He needs arrested for dereliction of duty and much more. How could you described the door pictured below as not being damaged?

Athens County Sheriff Pat Kelly's Stepson, who had lived in Kelly's house, recently admitted to dealing drugs, while Kelly has made it his pledge to eradicate drug dealers. What hypocrisy. They all need brought to justice, and I need the assistance of the Department of Justice to do it. 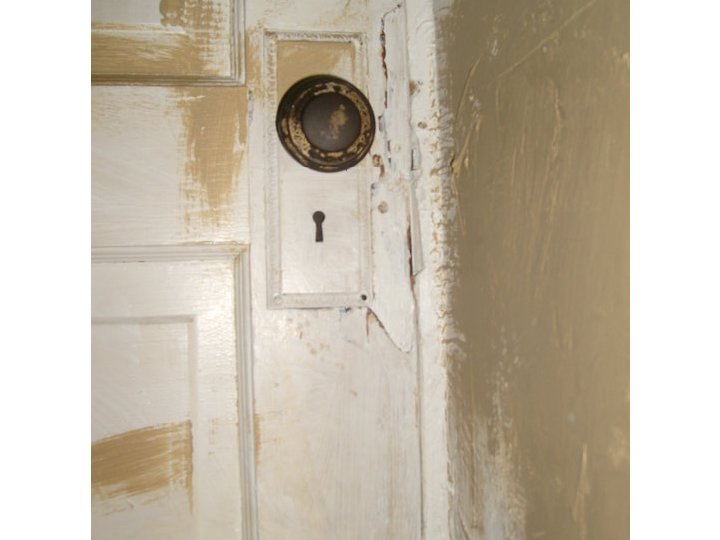